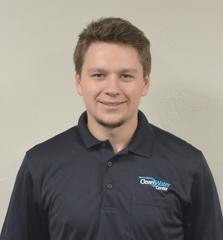 Shae has been with the Clean Water Center since July 2018. He delivers salt to homes and does basic maintenance on softeners. He enjoys meeting new and interesting people at each appointment. On his free time, Shae likes to hunt, hike, and snowboard.

Customer Reviews
About Me
View all Reviews
Testimonials
from customers I've helped!