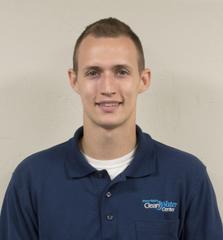 Kyle has been with Water-Right's Clean Water Center since February 2018. His strong communication skills and Water-Right school certification have been a great addition to the company. Kyle's daily tasks include servicing softeners and filters, helping with installations and salt deliveries, helping with schedules and in-shop service calls. He finds pleasure in having something different to do every day and making an impact on his customers' home's water quality.

When he is not working, Kyle has fun fishing, hunting or doing anything outdoors. He likes to spend time with his fiance and dog as well.

Customer Reviews
About Me
View all Reviews
Testimonials
from customers I've helped!